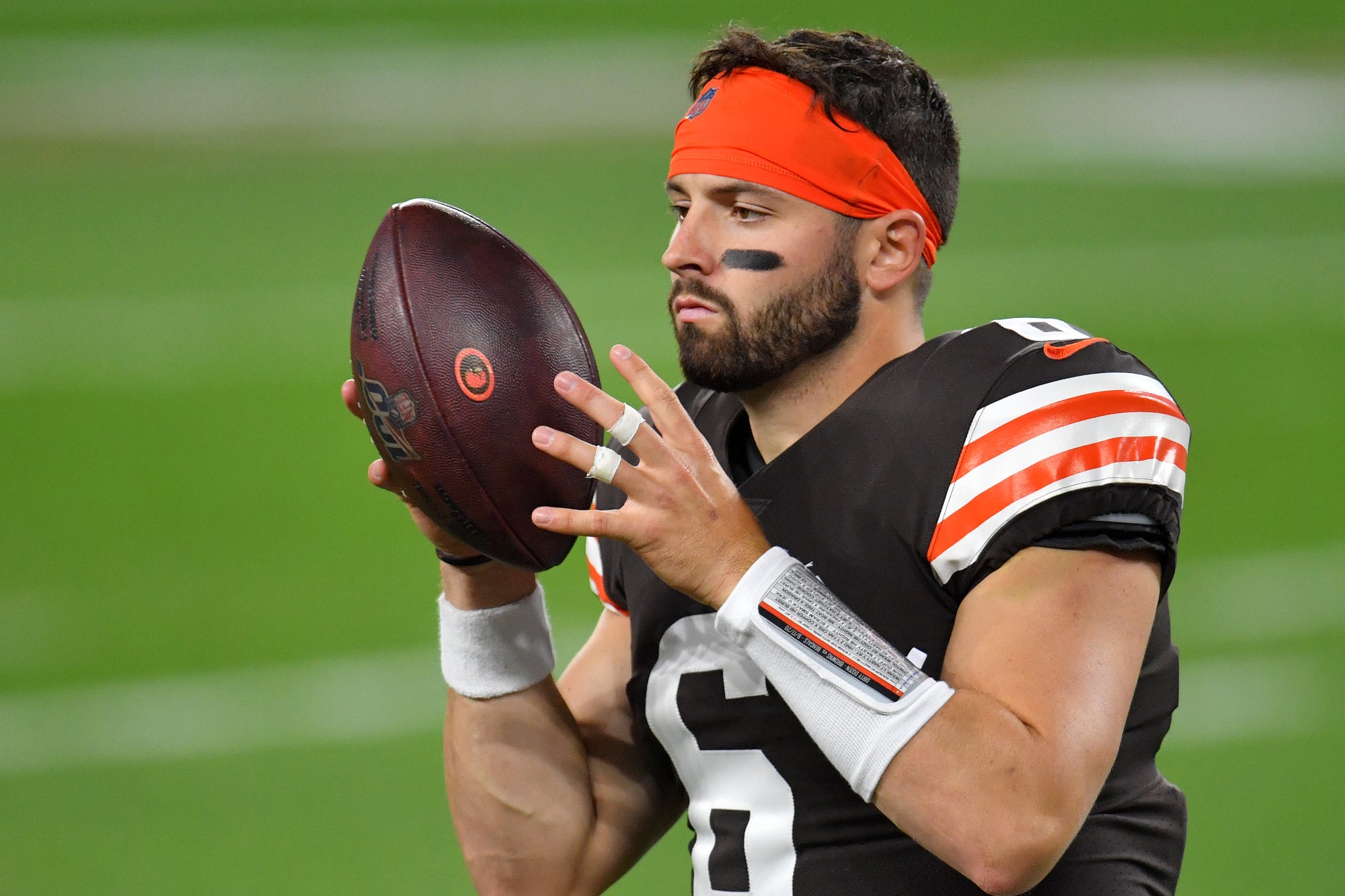 THC-free premium wellness and CBD brand Beam announced Tuesday that Cleveland Browns quarterback Baker Mayfield will become its latest brand ambassador. The former No. 1 overall NFL draft pick has also invested in the brand with the venture fund he began with his brother, Matt, which is called Camwood Ventures.

Mayfield was kind enough to sit down with Entrepreneur and talk about his newest investment, as well as rest and recovery tips, how he deals with stress and what it’s like to lead a football team over Zoom.

Entrepreneur: Tell me how you first got interested in Beam. What sold you on the product?

Mayfield: I first got introduced through my brother, Matt. We started a small venture capital firm, and he introduced it to me. He had tried the product a couple of times, right when they were first starting — the CBD bars. After some back and forth, and changing some of the products, Matt introduced me to [Beam Co-Founders] Kevin Moran and Matt Lombardi through text. We just started talking, and they just kept sending more product, and I truly just kind of fell in love with it, especially how clean the product is.

Was there one product or experience in particular that made you realize you believed in the company?

For me, it was the Clarity powder and capsules. I would use that in the mornings, getting up to go work out. I’m a big coffee drinker, I can’t deny that. But I would the Clarity in the mornings, and then all of a sudden, I didn’t need my coffee anymore. During quarantine, I’d say the Dream definitely helped with the stress of living at home.  Being able to get a good night’s sleep was truly valuable. And so the Dream powder was great. I mean, it tastes fantastic, but just being able to wake up rested every day was great.

Related: Chris Paul: ‘I Had $151 in My Bank Account When I Declared for the NBA’

I’m sure stress levels can be amplified when you’re a quarterback and the face of an NFL game. What do you do, either during a game or off the field, that helps?

During the game, it’s always trying to keep focused on the task at hand — being very objective-oriented with what we’re doing. Play-by-play, here are the steps I need to take to accomplish what we want to do. And I think that goes hand-in-hand with stuff off the field as well. I need to get my body to this certain point to feel and perform the best I possibly can. So, how do I do this, step-by-step? And Beam goes hand-in-hand with that, because they have different products to offer, depending on what your body needs.

Is there a process or routine that you do consistently? I know many of Beam’s products are for recovery, but I can’t imagine being tackled by 300-pound people is easy on the body. What do you do to recover so you can play each week?

The Dream powder at night is great when we’re staying at the house, but the best part, they came out with the capsules. That way, when I don’t have the whole setup to make the actual Dream powder tea, the capsules are accessible and I can get the best rest the night before a game. Then, throughout the week, especially on the longer days where I’m having to study, do all the film and on game day, having the Focus capsules … I’ve moved from the Clarity to those. And I think that’s just a personal preference for me to get my brain racing so I’m ready to attack the day.

Peak performance is very important for a pro athlete. How many hours of sleep do you try to get, especially on game day?

I definitely try and get at least eight. I don’t think I personally need that much sleep to be able to perform at a high level — that’s just how I always have been — so game day, eight is plenty. If I sleep longer than that, I kind of feel drowsy. A little bit overrested,

I definitely think their background made it easier for me to trust it just because they know exactly what you have to put your body through to be at peak performance. They have experienced something similar to what I’m going through, and I think being relatable is one of the best qualities for any leader, any company and any salesperson. Especially if you can also get the best out of your employees and the people around you. That’s a great quality, and both Kevin and Matt have that.

Is relatability something you focus on when picking which brands to represent?

I am who I am and I’ve always been very proud of that. That’s how I was raised. So, I’m not gonna put on a front just for a product. It’s going to be true and genuine and authentic. I try to carry those qualities and be relatable at the same time throughout my work and the stuff off the field as well.

Related: Dwyane Wade on Why He Doesn’t Have Time for Rest

I feel like a lot of professional athletes are a little bit stiff, or have a difficult transition to TV commercials, but you seemed polished from the first ads. Do you think that emphasis on relatability is part of the reason why?

For starters, doing a bunch of interviews throughout the process of being a quarterback. You have to speak on behalf of many throughout the year. But then, like I said, we’re not going to accept the deal or endorse something that we don’t truly believe in and it doesn’t fit our brand. That’s why it’s easy for me to go out there and just kind of be myself with some of those spots.

I try and have fun with it. I also play the game that way — if I’m not having fun doing it, then, I truly think I’m wasting my time. It was different at first, but this time around, I enjoyed the process of filming the commercials more — especially for Progressive. It’s just more natural. I think the more experience you get, the more comfortable you get.

Was there one tip that a director gave you that really stuck with you?

We had the same director for the first two campaigns for Progressive, and he said something to me the first year. He said, “Stop trying so hard and just be yourself.”

And that really stuck with me. He could tell I was kind of uncomfortable at first, and I was trying to do too much, but the reason we did the deal and they chose me to be the face of that campaign was because it fit for them as well. So I just think, you know, being myself and trusting that it’s more than enough, is something I can lean on.

You spoke about teamwork with Progressive and this director. Teamwork and chemistry are essential aspects of both business and sports. So, were there things you and the Browns did this offseason that helped you build chemistry?

There’s no way around it, the Zoom meetings and all that. To put it very bluntly, it sucks trying to get to know your teammates that way, trying to accomplish your goals. It’s not the easiest way, but it’s not an excuse. Everybody had to do it, and I think we did some things that were very innovative and creative for our franchise. We did some introductions for players and, and staffers as well — not just like a, “Hey, your name, where you’re from …”

We called it four H’s: Your hopes, heroes, heartbreaks and … there was one more, but I’m blanking now. Essentially, it was a look deeper into somebody’s life story to truly know who they are. Those are the conversations everybody misses out on. Zoom meetings are so job-oriented, and the stuff that truly makes a team or a company better is the cohesion. That’s what you miss out on with not being in person — the small conversations of getting to know somebody and why they tick. So, I thought that was extremely creative and it set a strong foundation for us.

What sets the foundation for your business endeavors and off-the-field presence?

Camwood Ventures is a small, small firm, and we believe in each employee with Team BRM. It started from the bottom … I don’t think people realize Camwood is the street I grew up on — the street my brother grew up on. That’s the foundation, never forgetting where you came from, staying true to who you are. And I think within my on-the-field stuff, off-the-field stuff, it’s all about realizing the work ethic you have to put in to get the results you want. That, and it all has to gel. So we’re very selective about our choices, about what we want to do, and we’re very proud of that.

The company explains that the photo could be interpreted as racist. Grow Your Business, Not Your Inbox Stay informed and join our daily newsletter now!October 26,...
Read more
Business

October 26, 2020 5 min read Opinions expressed by Entrepreneur contributors are their own. Marketing is not advertising. It’s not posting on social media or writing emails,...
Read more
Business

The burger chain will offer a free Whopper to customers who drive by one of the "the scariest places on earth" — five shuttered...
Read more

IKEA reprints and delays the launch of its 2021 catalog for...

Entrepreneur en Espanol - October 26, 2020 0
The company explains that the photo could be interpreted as racist. Grow Your Business, Not Your Inbox Stay informed and join our daily newsletter now!October 26,...

3 Psychological Biases That Affect Whether Someone Buys Your Product or...

Burger King is offering a free Whopper if you visit a...

Entrepreneurs Need to Train Like Elite Athletes, According to a Former...

Analysis: Trump is stealing China’s playbook to deal with TikTok