Here's How a Justice Amy Coney Barrett Could Affect Entrepreneurs 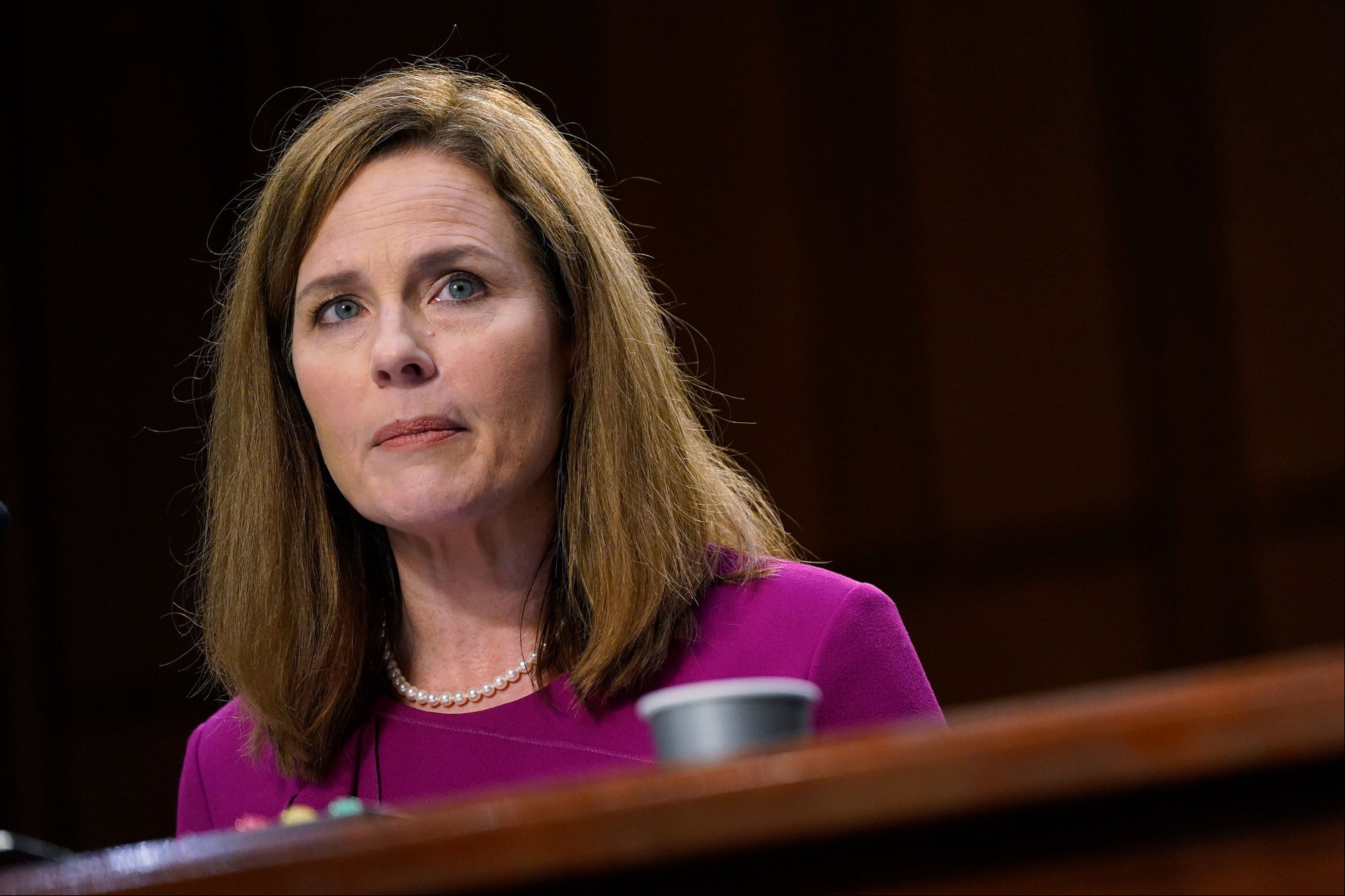 This week, Supreme Court confirmation hearings got underway for Judge Amy Coney Barrett, President Trump’s controversial, last-minute pick to fill Justice Ruth Ginsburg’s seat. Barrett’s pro-life stance and potential willingness to overturn Roe v. Wade has been the main topic of discussion. But where does she stand when it comes to business interests — for big and small companies — and protections for employees? Or contract workers?

A recent study found that one-third of Americans now work in the $1.2 trillion freelance economy — a figure that’s ballooned 22 percent since 2019. On November 10, the Supreme Court will hear arguments on the fate of the Affordable Care Act, which provides health insurance to millions of Americans who don’t get it through their employers, as well as small business owners (with under 50 employees) who use the public marketplace to provide insurance to their employees. According to the Commonwealth Fund, “More than 5.7 million small-business employees or self-employed workers are enrolled in the ACA marketplaces; more than half of all ACA marketplace enrollees are small-business owners, self-employed individuals, or small-business employees.” In 2017 Barrett wrote that she disagreed with Chief Justice John Roberts’ decision to uphold the ACA, and if she’s confirmed before the election it’s likely she’ll have a say in the case.

It’s widely understood that the current Supreme Court is “pro-business.” But this traditionally translates to pro-corporate business, and according to an analysis done by Rocket Lawyer, Barrett is set to become the court’s most “pro-business” justice. The analysis looked at Supreme Court opinions from 2018 to now, “in cases where business interests are in conflict with consumer, employee, or other non-corporate interests.” Then, Rocket Lawyer looked at Barrett’s opinions on the Seventh Court of Appeals during the same period and found that 60 percent of the Supreme Court’s opinions favored corporate interests (the most conservative justice on the court, Clarence Thomas, had an 82 percent rate of siding with big business). By comparison, Barrett sided with big business 83 percent of the time in her own opinions.

So how will all of this affect small businesses? Does an even more pro-corporate court bode well for startups and fledgling entrepreneurs? What about the snowballing number of Americans who work for themselves as gig workers and contract employees? Amy Coney Barrett is positioned to become the Supreme Court’s most reliable advocate for big businesses. But will her influence on the court benefit small-business owners and freelancers too?

The answer, according to Rocket Lawyer founder and CEO Charley Moore, is, “Not always. It depends on whether the small business’ interests are in conflict with a larger corporation’s interests. For example, if you consider gig workers and freelancers to be small business owners, then certain rulings against gig workers, such as those related to arbitration, would not favor all small businesses.”

Corporations have often used forced arbitration to ensure that worker conflicts are handled in pre-arranged circumstances or by corporate-friendly arbiters. For example, in the 2019 case Lamps Plus v. Varela, the Supreme Court sided with the corporation Lamps Plus, ruling that all parties must explicitly agree on class arbitration — in the arbitration clause of their contracts — for it to be an option. “This means that groups like gig workers, employees or customers who sign ambiguous arbitration agreements forfeit their right to class arbitration,” Moore says.

Earlier this year, Judge Barrett also sided with a corporation over gig workers in Wallace v. Grubhub. “This ruling affirmed that under the Federal Arbitration Act, food delivery drivers from Grubhub were subject to arbitration agreements and therefore unable to bring a class action claim to court,” Moore says. “In this case, the Grubhub drivers were seeking classification as employees — a status sought in other lawsuits for gig workers on other platforms.” Barrett’s ruling helped Grubhub circumvent laws requiring them to pay their workers overtime.

Overall, Moore says, “Given Barrett’s personal track record, combined with the past decisions of the currently sitting justices, it is hard to imagine that small business owners who provide or consume services that are subject to arbitration clauses will be the protected party in future cases heard by the Supreme Court. In most situations, the protected party is going to be the corporation on the other end of the lawsuit.”

Small businesses could be on the hook for corporate screw-ups

One important decision coming down the SCOTUS pipeline is Ford Motor Company vs. Montana, in which Ford is arguing that it shouldn’t be held accountable for its own defective products outside of the state where they’re headquartered or manufactured. If Ford wins, much of the litigation around corporate malfeasance — in this case, a woman died because of a faulty Ford tire and a man suffered a traumatic brain injury due to a malfunctioning airbag — could fall on local businesses where the defective products were sold to consumers. “If the Court rules in favor of Ford, local sellers might be called on to answer for the alleged faults of the manufacturer,” Moore says. “This would ultimately place the burden and cost of litigation on the shoulders of the vendor, which in many cases, could easily put them out of business.”

David Reischer, an attorney at LegalAdvice.com, agrees. “It is quite possible that local businesses that sell corporate products may be on the hook if Ford avoids liability,” he says. “It seems to me that the Montana Supreme Court properly decided the case that Ford had indeed availed itself of the privilege of doing business within the state and was therefore subject to specific jurisdiction therein. It seems self-evident that Ford is in the best position to indemnify the smaller local parts businesses that distribute the corporate product.”

We are entering an era in which the Supreme Court will be hearing more and more cases around the vast influence of big tech companies, and monopolistic or antitrust law will be at the center of those arguments. “Barrett would likely abstain from aggressive regulatory efforts of technology companies and be sympathetic to side with them on a frequent basis,” Reischer says. “Giant technology behemoths like Facebook, Twitter, Amazon and Google will likely receive very little regulatory restriction from Justice Barrett.”

One upcoming SCOTUS decision could affect many small businesses, despite the fact that it’s being fought by two giant tech companies. Google v. Oracle is a copyright case, in which Oracle is claiming that Google lifted key parts of the Android interface software that Oracle developed. While Barrett has never ruled on a copyright case before, Reischer says, “She tends to favor big business at the expense of smaller entrepreneurs. Even though Google v. Oracle is a battle between two behemoths, the average American entrepreneur should care about Barrett’s decision in this case because it would offer monopolistic corporations stronger proprietary rights over basic programming languages and/or systems.”

Moore concurs with this. “The outcome of this case would impact the protection of the intellectual property of countless tech companies, who can all be considered small businesses when they first start up,” he says.

Whether you’re a business owner, a salaried employee or a contract worker, you can expect Justice Barrett and a more conservative court to side with employers over employees. Jonathan B. Orleans, an employment attorney at the law firm Pullman & Comley, says, “I expect that a more conservative Supreme Court will be increasingly employer-friendly in employment cases. Employees may find the court less sympathetic to discrimination claims in general, and particularly toward claims of retaliation, in a which an employee alleges unfair treatment by their employer because they made or assisted in a discrimination complaint.”

In past discrimination cases, Judge Barrett has generally ruled against workers claiming discrimination. In 2019, in Terry L. Smith vs. Illinois Department of Transportation, emergency traffic patrol worker Smith said he was fired after complaining about bigotry on the job. His boss Lloyd Colbert called Smith the “N” word, but Barrett ruled against Smith, writing that, “Without evidence that Colbert’s outburst changed Smith’s subjective experience during his last two weeks at the department, a reasonable jury could not resolve the hostile work environment claim in Smith’s favor.”

In another case, Dale E. Kleber vs. Carefusion Corporation, after 58-year-old lawyer Kleber didn’t get a job that was given to a 29-year-old, he alleged the “disparate impact” of age discrimination. Barrett ruled that “disparate impact” applied only to employees, not job applicants. Of course, much of discrimination comes down to who gets a job and who doesn’t.

Overall, a more conservative Supreme Court means that we’re likely to see more of the battles for employee protections happening in local courts, or in the legislative realm. “When the makeup of the court is more conservative, we generally are less likely to see the court taking an expansive view of the meaning of the statutory text in order to expand employee rights,” Orleans says. “Employee advocates are therefore going to be forced to battle in Congress to have federal statutes amended with more explicit language in order to achieve their objectives. We may also see increased activity in state courts and legislatures, at least in some states, to provide more employee protections.”

October 22, 2020 4 min read Opinions expressed by Entrepreneur contributors are their own. At no time in recent history have businesses suffered as much as...
Read more

Getting Dirty With Mike Rowe