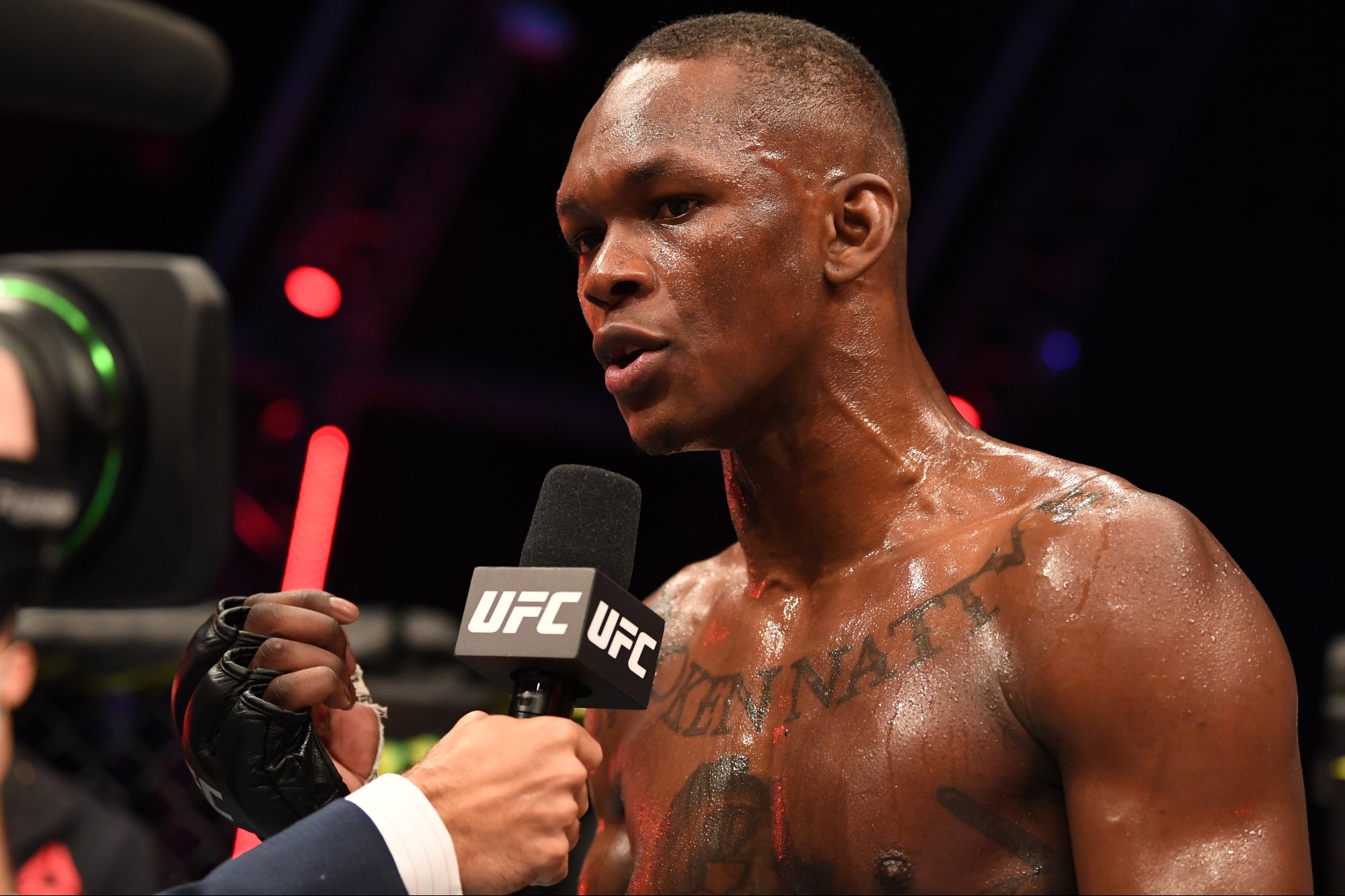 When Israel “The Last Stylebender” Adesanya appeared in our virtual meeting room wearing a Versace bathrobe, I knew I was in for a great discussion. The undefeated UFC middleweight champion spoke to me on the eighth day of his 14-day quarantine from his New Zealand home. Just eight days before, he defended his title for the fourth time against then-undefeated Paulo Costa on Yas Island, Abu Dhabi.

In my 10 years of interviewing people from all over the world, I never met someone like Adesanya. It was special.

Maybe that’s because he is special.

Regarded as one of the most dangerous strikers in the world, he has over 100 professional fighting victories and a 20-0 record in mixed martial arts, having battled his way up the ranks of various promotions, and now, through much of the UFC middleweight division. He’s now ranked as the third-best pound-for-pound fighter in the world.

But it’s his way of thinking that makes him truly special.

You might not have dreams of becoming a fighting champion like Adesanya but, as entrepreneurs — and humans — we fight battles everyday. Some big, some small. And it takes a plethora of psychological tools to survive them. Here are just four of the many standout moments from our conversation, which you can see in full here.

Adesanya’s responses have been condensed and edited for readability.

In his title defense against the then-undefeated Paulo Costa, things got personal. It was the second time in UFC history that two undefeated fighters met for a title bout (the last was over 10 years ago). It earned more than 700,000 pay-per-view buys, according to sources, making it the third-biggest UFC fight of the year. With the stakes so high and the feud so bitter, it would’ve been easy to get emotional. Instead, Adesanya stayed grounded.

“You say something about me, my country, my people, it’s personal,” he says. “But I don’t take it personally. That’s the difference I learned from therapy. You don’t take things personally. It’s personal, but I was just like, ‘Right.’ All I kept on saying was practice patience.”

The lesson here? Pace yourself, practice patience, remain focused and in control until it’s time to let loose — then surrender yourself to your training. You don’t want to exhaust your resources too quickly, lest you be left weak, defenseless and ripe to be picked apart by your adversary.

2. Surround yourself with people you trust

With fame and fortune comes people eager to take whatever they can from you, from the inside of your “circle” and out, the former being the most dangerous. “There’s no book on how to be rich and famous,” Adesanya says.

Being able to trust those around you is paramount. Whether it’s the sponsor on your trunks, the man in your corner, the coaches you train with (Izzy trains at City Kickboxing) or the accountant monitoring your books.

“When I was on my last 100 bucks my sponsor, Engage, told me to check my account. They sent me enough money to last for five months,” Adesanya says. “My father is an accountant, he’s a smart man. I could pay someone else to do the job that he does, but he does it for free and out of love and because he wants to see me be successful. No one on this planet is going to have my back like my father does,” he continues.

“To this day, [my dad] is that hawk, that super eagle that’s circling and quietly watching, seeing where the vultures are. The vultures think they’re the ones circling me, but [what they don’t know is], they’ve got an eagle circling all of them. I believe in him and the team I have around me.”

Success starts with those around you. Collaboration is one of the main contributors to our success as a species — we would’ve died off long ago had we not learned to trust and rely on one another. So, no matter where you are on your journey, ensure every person alongside you has your best interests at heart and is prepared to have your back — no matter the cost.

Related: How to Become the Best Possible Version of Yourself

3. Detach from the outcome

“I forget I’m the champ all the time,” Adesanya says. “I don’t even have the belt with me. My belt’s somewhere at the gym or somewhere at my coach’s house. I’ve never really attached myself to that… it’s nice, but I’ve gotten many belts in my life.”

People focus too much on outcomes rather than the work that’s going to get them there. They dream all day about the fruits of their future labor while neglecting the garden they’re standing in. So, focus on training for and winning your next fight, not the belt you wish to hold up after.

4. Have courage to get help when you need it

“I’ve never said this to anyone before, but back when I quit my job I was going through the biggest depression of my life,” Adesanya says. “Nothing was working. My job sucked. I hated it. My girl was about to leave me. Me and my dog weren’t bonding, because even he could see I wasn’t stable. And I knew this person, she had been committed. And I remember, I asked her to give me the number, because I didn’t want to be in control anymore. I wanted someone else to just take the keys. I wanted someone else to take control and put me in a hospital bed. And she gave me the number of people to call to commit myself. And I remember I was like, ‘Nah.’ I just couldn’t do it though, because I knew for me, as Izzy, that wasn’t what I needed. I just needed to push through.”

“But I knew I needed to ask for help. I talked to my parents, my friends, and then I started to see someone,” he continues. “The first step is to just accept that you’re not perfect, accept that you’re flawed, and realize that it’s okay if you need help. You just have to be honest with yourself.”

Related: UFC Heavyweight on Fighting, Mindset and Chasing Your Dream

Everybody has flaws. Fame, fortune and celebrity can blind us to this reality. But it is a fact of life. And it takes deep self-reflection and humility to recognize it, and confidence and courage to ignore the stigmas and do something about it. For champions like Adesanya — and aspiring champions across every industry — prioritizing mental health is a non-negotiable. This is especially important when the stakes are high, lest you risk self-destruction or becoming another tabloid statistic.

Long before your arm is raised in victory and the belt is placed around your waist, you must cultivate a champion mindset. It starts with your training, discipline and emotional control. It starts with your team, the people around you and the trust you have in each other. And it starts with the confidence to go all-in, yet the humility and self-awareness to step back and recognize when something isn’t right. In the end, becoming a champion starts from within.

Becoming a champion starts with you.

Related: Holly Holm’s Shocking Victory Over Ronda Rousey Reminds Us That Every Champ Is Beatable

Leadership Lessons From Ted Talks, the Oscars, and Burning Man

October 29, 2020 5 min read Opinions expressed by Entrepreneur contributors are their own. When the organizers of Mobile World Congress — one of the tech...
Read more
Business

The iPhone maker on Thursday reported $64.7 billion in revenue during the quarter, up 1% from the same period last year, and $1 billion...
Read more

Leadership Lessons From Ted Talks, the Oscars, and Burning Man

Zohar Babin - October 29, 2020 0
October 29, 2020 5 min read Opinions expressed by Entrepreneur contributors are their own. When the organizers of Mobile World Congress — one of the tech...